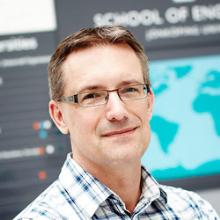 Material mechanics is a field of research which comprises theoretical, numerical and experimental analysis of the constitutive properties of solid materials, regarding deformation and damage processes. The task is to develop new, or improve existing, constitutive models for (large) inelastic deformations, and to use effective numerical methods for these models. Patrik Cannmo's main research interest has been within the area of damage mechanics, with a special focus on damage-based interface models with the application to the degradation and failure of a polycrystalline microstructure.

Patrik Cannmo was born in Falköping, a small city in the heart of West Gotaland, Sweden. In 1985 he moved to Lund to study Mechanical Engineering at Lund University. Five years later he had earned the degree of Master of Science, majoring in Mechanical Engineering. After that he spent six years as a PhD-student and he, finally, became a PhD in Solid Mechanics at Chalmers University in 1997.

As a new PhD he got employed at "Provningsanstalten" in the rainy city of Borås, where he mostly worked with FE-calculations and various research. Four years later, he and his family moved to the sunny city of Jönköping, since the Department of Mechanical Engineering at Jönköping University needed to strengthen their resources within the field of Solid Mechanics. Patrik is now working there as Head of Department.